Why You Should Control Your Brand On Social Media

The Impact On Marketing & Sales

Have you ever heard of the saying, "you are the face of the company"? If you think about your organization who do you think fills that roll? In most businesses and organizations today, the answer would be Social Media.

Monitoring your business’ social media presence is incredibly important. You need to respond to people talking about your brand and understand how people view your company. Social media marketing, branding and selling is not easy, in fact, it’s hard work! It requires time and effort, often across multiple departments and amongst multiple employees. It's not just about posting and tweeting. To build your marketing, branding and sales through the use of social media it requires a strategic plan and tactical approach to implement. 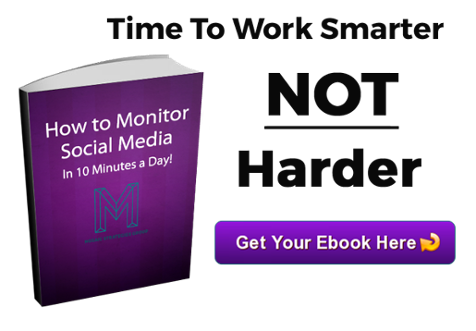 From the ebook, "How to Monitor Social Media in 10 Minutes a Day":

As it turns out, people also have some pretty high standards when it comes to response time. Especially when they’ve got a bone to pick with your brand. According to charts published on Search Engine Watch, 70% of surveyed Twitter users expect a response from brands they reach out to on Twitter, and of those users, 53% want that response in under an hour. In fact, the percentage of people who expect a response within the hour increases to 72% when they’re issuing a complaint.

Due to the role that social media plays in today's communication and information highway it now impacts multiple departments in an organization and doesn’t just belong to Marketing anymore. Actions that a Social Media Manager take can seriously impact all other departments such as Sales and Support. Marketers have the ability to collect information from social media to help create better marketing campaigns, enable sales in closing more deals, and delight customers to forge long lasting relationships and more business from referrals. As a result, social media managers on a marketing team should see themselves as the point-person for multiple departments’ different goals.

72.6% of salespeople who incorporated social media into their process outperformed their colleagues. In addition, socially savvy reps beat their quotas 23% more often. We call this social selling.

Social selling is the process of researching, connecting, and interacting with prospects and customers on social media networks. This type of selling has allowed a further reach into target markets. Through actions such as commenting on, liking, and sharing prospects’ and customers’ posts, salespeople create relationships with buyers and boost their credibility by taking an interest in what they’re interested in. In turn, this has also shaped a new buyer's market.

The buyer's market in today's world has evolved drastically over the last 50 years. And even more drastically over the last 25. I mean can you believe that the first cell phone call was made On April 3, 1973? Who could forget the Nokia 1011, it was the first mass-produced GSM phone in 1992. It was produced until 1994. As a matter of fact, it wasn't long ago that people were trying to buy and carry the smallest cell phones you could find and now we have the phablet. The next big step we come to that changes the buyers' market is the first public website which went online August 23, 1991. These technology milestones have pushed our marketing, branding and sales into an entire new realm through connectivity. Then along comes social media and BAM! An almost unlimited access to people that you have never met before now can see you, your company and brand. This is a dream come true for marketing departments around the globe.

Today top social CEOs not only use social media as yet another platform for communication, but also leverage social networks like Twitter as an unfiltered news source. Being able to see and hear the conversation happening in real time has become invaluable. However, what if you or your company happen to be in that unfiltered news source stream? Having the knowledge and skill to properly monitor these channels helps company marketing, sales, PR and other departments stay on top of trends, news and opportunities.

With all the exposure you and your company can capture via social media don't miss out on the opportunity, just make sure to monitor it!

Partner at Mosaic. As a certified inbound marketing specialist, I work with clients to devise and revise digital strategies to create positive growth for Nonprofits, foundations, issue-based initiatives, and service-based businesses.

Volunteer Management: The Dos And Don’ts of Working With Volunteers

Let Us Know What You Thought about this Post.

REACHING THE RIGHT AUDIENCE TO INCREASE ENROLLMENT Marketing and PR tactics for schools over the last couple of years ha...

Ways Blawging Can Build Your Practice...Ooops, I Mean Blogging Does this sound like you? You are an expert in your field...

Learn and grow with award-winning support and a thriving community behind you.

We have a diverse client-base of HubSpot partner agencies, consultants and global brands. We forge long-standing relationships through reliable service, passionate supportive and a lot of hard work.